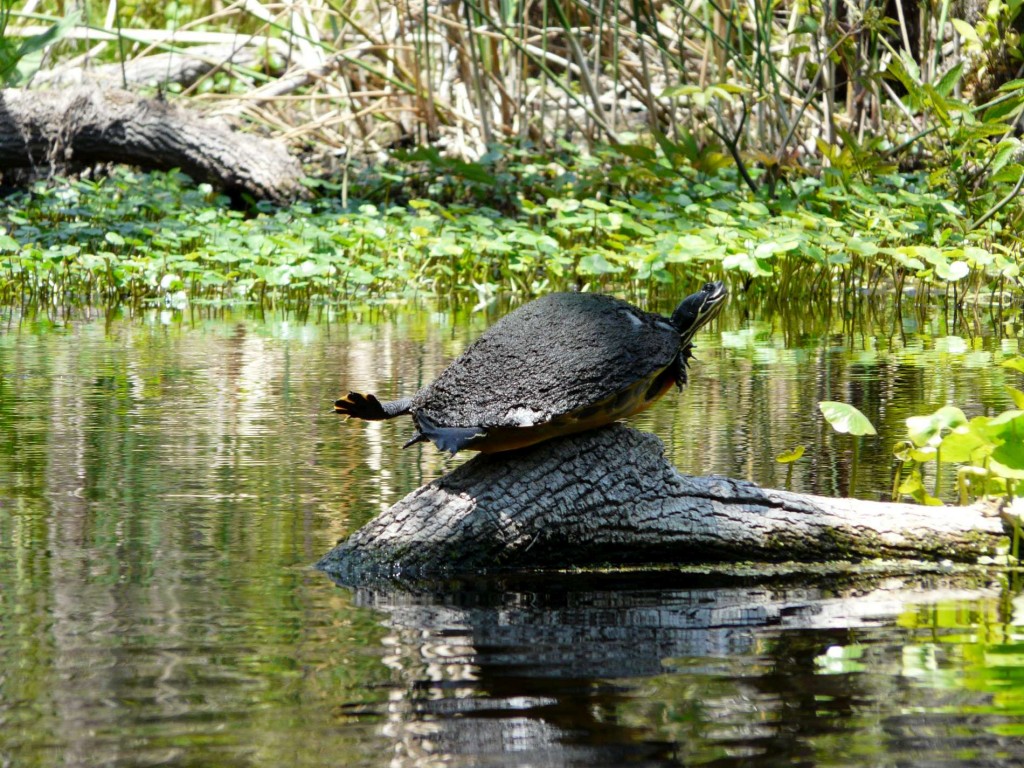 A bit limited on time, we decided to stay relatively close this weekend and went back to Katie’s Landing for another Wekiva River jaunt.  Last time we were here, we traveled upstream toward Wekiwa Springs. This time we planned on venturing in the opposite direction, downstream toward the St. John’s River.

Before heading out, a nice little picnic was had at the launch site, right next to the river.  (OK, fine, we brought subs from Firehouse.  Whatever.)  There was a family fishing while we ate our lunch – it was amusing to see the friendly smack-talking between the family members… apparently the girls caught a fish before the boys did. PWNED.

After loading up on sunscreen and bug spray, we slipped the ‘yaks into the water and headed downstream.  The weather was a little warm, around 90°, but the spring-fed water really cools things off quite a bit.  The breeze was behind us, as was the current, so we had a nice leisurely float down the river, most of the paddling done just to keep the boats oriented.  We let the river take us for a little ride.  The current was surprisingly swift at a few points – nothing even close to rapids, but it kept us moving at a nice pace for taking in the scenery.

The first part of the trip, we floated by some pretty cool houses on the east bank, and eventually reached Wekiva River Haven.  It’s hard to miss, even if you’d prefer to.  That’s pretty much the last thing man-made thing we saw while heading downstream.

I’m pretty happy with some of the photos I captured on this trip.  A few Great Blue Heron, some pretty funny pics of a turtle who looked like he was planking, ducks, Ibis… But neither of the two gators in the water.

Most of the things I’ve read indicate the gators are a relatively low threat as long as one uses common sense, but it’s alligator mating season, and I still get a little anxious when I see them close up.  One was about 6′ long, was in the water about 10′ from KC’s boat, going perpendicular to our trajectory.  It’s cool though, it disappeared under the water shortly after we saw it(!).  We decided to head back after that, mostly because it was about time to head back anyway.

The diversity of the different parts of the Wekiva are astounding to me.  I really love paddling the Wekiva River.  There are a lot more places to check out, but sometimes familiar is nice. 🙂

KC and I are getting pretty good at loading/unloading the boats.  Just before she got her boat, I ordered the Malone Stax Pro 2 system – so far I’ve been really happy with it.  We timed our unloading routine this time, and it took around 9 minutes.  I suspect it takes longer to load them.  I’ll have to remember to start the timer next time we’re loading.

It’s likely going to be a few weeks before I’m on the water again.  Stupid responsibilities!

Here’s the map for the trip.  We paddled a total distance of 3 miles.