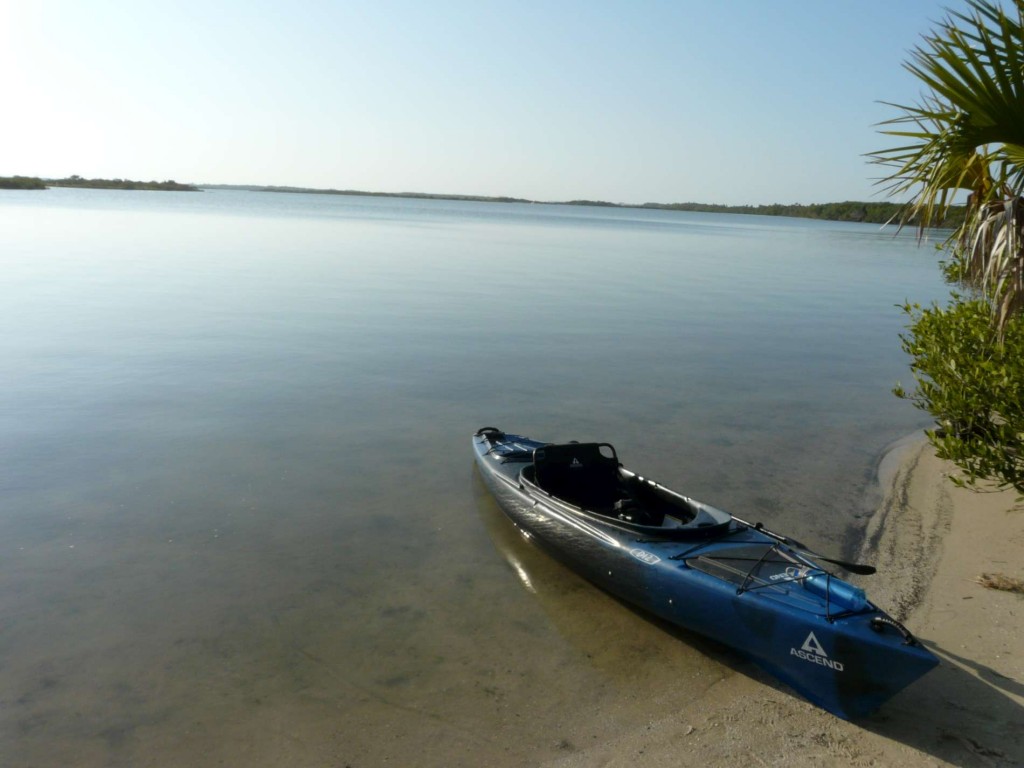 The trips just keep getting better.  This one, I think, is my favorite so far.  The Indian River, launching from Canaveral National Seashore, Lot #7.

On a tip I got from a random doctor office employee, I decided it was time to check out the Indian River.  Tales of manatee and dolphin sightings had me sold in a big way.  The initial plan was to launch at JB’s Fish Camp, but some friendly advice from Dave over at Dave’s Yak Tales pointed me toward Canaveral instead.  It was sound advice – we drove by JB’s and it looked busy and crowded.  Lot 7 in the Canaveral Nat’l Seashore park was perfect.  Around 15 parking spaces, right by a small beach perfect for launching.  The park entry fee is $5 for a vehicle, but it was FREE today, due to some sort of national park week promotion. SCORE!

We pulled into the lot just before 2pm.  I strolled over to the launch spot to check it out… and there were 3 manatee not ten feet out.  AWESOME.  I ran back to the truck to grab my camera and excitedly (but quietly, though I’m not sure why) tell KC what I had just seen.  A few photos and squees later, we started to unstrap the boats from the truck, and quickly realized that we needed bug spray, STAT.  Even though it was only 2pm, the mosquitoes were NO JOKE.  Bring bug spray, and use it liberally.  We actually had to re-apply at the end of the trip to load the boats, because those little blood suckers were ruthlessly unbearable.  They were nearly nonexistent on the water, though.  Don’t forget the bug spray.

We dropped in and headed northwest from the launch, toward an archaeological site called Turtle Mound.  The history of Turtle Mound was cool to me – it was built by the Timucuan people around 1000 BCE.  Incredible.  We could have beached the kayaks to walk around on the boardwalks, but another manatee sighting distracted us and perhaps served as a reminder that ON the water is where we really wanted to be.

The features of the Indian River are spectacular.  Oyster reefs, dozens of islands, and lots of wildlife.  The mullet fish were darting around everywhere and pirouetting out of the water almost constantly.  Groups of small crabs were frequently seen crawling onto the many island shores.  I guess the brackish water makes a pretty big difference in the types of wildlife one can see.

Part of my goal for this trip was to check out at least 1 or 2 of the primitive island campsites that are owned by the park system.  One can reserve one of the dozen-ish sites up to 7 days in advance.  Once I found that information, I started to get really excited.  Another mid-term goal – camp on one of these islands. One of the campsites is less than .5 miles from where we launched. SO EXCITED.

The water conditions were very diverse.  Parts of the river, away from the intracostal waterway and main channels, were as smooth as glass.  Crossing the main channel, however, was not calm at all.  WHEEEEE!  We also lucked out with the weather again, because it was nearly perfect, if maybe a tad on the warm side.

Around 3.5 miles into the trip, KC started feeling a bit under the weather.  She’s on some antibiotics for a nasty toothache, and it’s just not treating her very well. Her boat is 10′ long and much lighter than mine, so she was having to constantly paddle to adjust her tracking in the rough channel, which wasn’t helping.  I had a length of paracord in my boat, so after resting for a few minutes, I offered to tow her for a bit.  A quick check on the GPS indicated we were about 2.75 miles from the launch site, on the other side of the wide, choppy canal.  It was time to turn around.  We had just spotted one of the campsites, so my goal was complete anyway.

I’ll definitely be returning here soon.  We didn’t venture south of the launch site at all, and there are plenty of calm-water sections of the river there that I’d love to explore.

Here’s the map for the trip.  Total distance today: 7 miles.