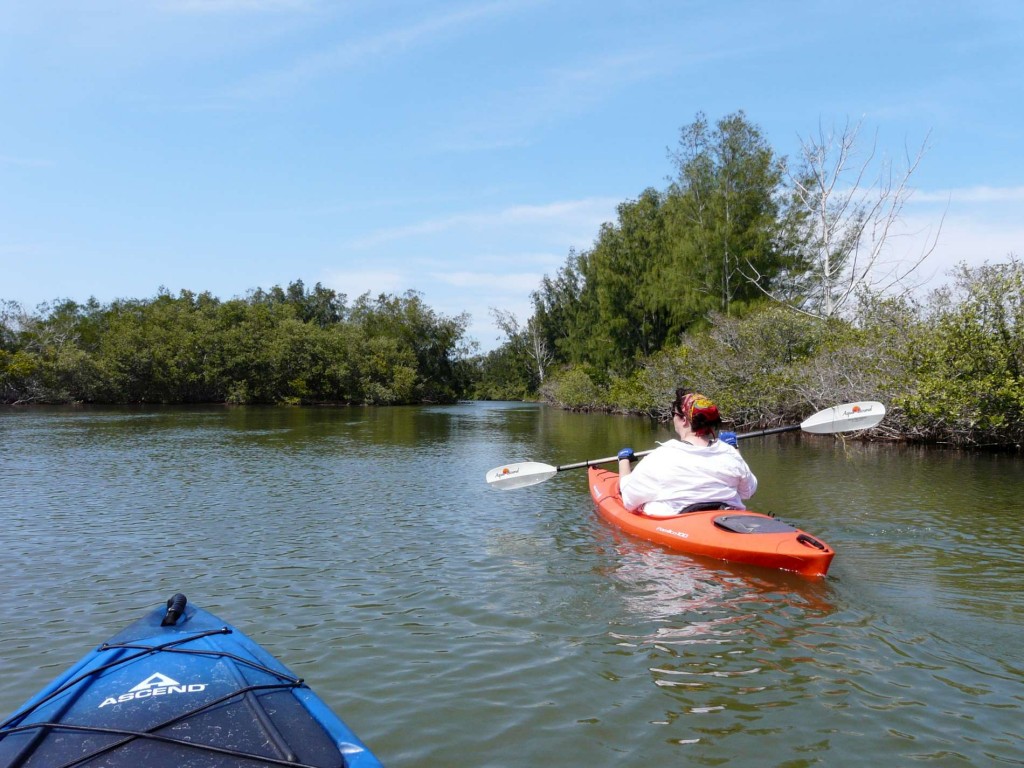 Back on the water! Woohoo! Today was a relatively lazy paddle on the Indian River. We launched from a nice beachy site at the end of a long, unmarked dirt road off of Courtenay Parkway just northwest of the Haulover Canal Bridge. The site seems to be pretty popular for paddlers, land-based fisher-types, and frolicing families. Parking is unstructured along the sides of the dirt road by the launch. When we arrived in the afternoon, I was able to drive right up to the water to unload the boats. That’s always nice. Use of the launch is free. There are no facilities. Bring bug repellent, the mosquitoes are fierce.

Mullet Head Island
Our first destination was Mullet Head Island, a protected bird sanctuary just southwest around a half mile from the launch. The wind was pretty swift today, and the river was white-capping quite a bit. It was a fun paddle out in the open water. What an amazing island Mullet Head is – hundreds, if not thousands of birds nest and hang out here. I’m still pretty new to bird identification, but we for sure saw a lot of Brown Pelicans, several Roseate Spoonbills, and various herons. The island is truly a spectacle. We circled the island, I took quite a few pics, then headed east across the channel, stopping briefly to marvel at a horseshoe crab navigating the shallows.

“Dolphin Cove” and Bairs Cove
We drifted randomly for a while, just taking in the scenery before heading back inland toward the canal. There’s a smaller, quieter route into the canal on the south side that is perfect for canoes and kayaks that dumps out into a place Kayak Dave has dubbed “Dolphin Cove”. We hoped to catch our first dolphin sighting from our kayaks here, but it wasn’t in the cards. Just northeast of here is Bairs Cove, a powerboat ramp and spectacular place to see manatees. We were able to see several of them, and they’re certainly not at all shy. These are just wonderful, serene animals. Given that powerboats are one of their only threats, it’s conflicting to me that there’s a boat ramp in a small cove with so many of them, but I digress.

Redneck Circus
One just never knows what will hold my attention. Today, it was a boat trailer that was solidly stuck on the busy single-lane boat ramp in Bairs Cove. This shiny object kept me paddling against the wind and current for nearly an hour while we watched two trucks, a boat, and several people try to un-stick the trailer. At one point, an old full-sized 4×4 Bronco took a crack at it, with a boat in the water pulling the trailer at various angles to try to un-wedge the un-budging trailer.  The ensuing tug-o-war lifted the rear end of the Bronco around 2 feet into the air, ironically mimicking a bucking bronco.

Once the struggle ended, we bid the boat ramp and sea cows adieu and headed back down toward the launch site, avoiding the various fishing lines from both banks, and called it a day.

Journeyed just under 3.5 miles on the rough water today.  Here’s the Map.